The twenty dollars gold is undoubtedly one of the most famous American gold coins. Double Eagle called our American colleagues, we present here the two main: Liberty & the Saint Gaudens.

The Liberty Head coin of 20 dollars in gold and its successor, the Saint-Gaudens, are the largest pieces produced (1850-1933) by the United States Mint.

The 20 dollars Liberty gold coin a US requested less and less appreciated because of seniority. There are 3 types shown in the different slides below : 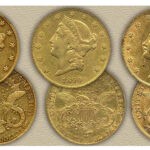 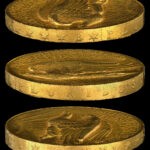 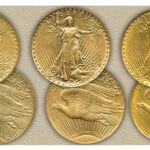 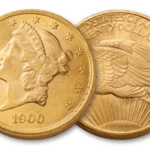 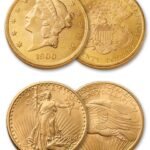 Assess the conservation status of your 20 gold dollars depending on its color. From left to right: very fine, extremely fine, non-circulated. The Saint Gaudens $ 20 gold takes its name from the famous designer Augustus Saint-Gaudens, one of the leading sculptors of the American history.

Theodore Roosevelt wanted in the last years of life of Augustus that it redraws the coins of the nation from the beginning of the 20th century. The work of Saint-Gaudens on high relief $ 20 gold coin is considered one of the most extraordinary pieces of art on any piece of US currency. We had up to eleven strikes to bring up details on the raised part (Photo right)

But the United States Mint finally insisted on a bas-relief version of this gold coin, in high relief version with a problem bank level that the relief is not allowed to stack the pieces correctly on each other.

Assess the conservation status of your 20 gold dollars depending on its color. From left to right: very fine, extremely fine, non-circulated.